skip to main | skip to sidebar

Some of My Favorite People

There is a new angel in heaven...Shirley Ann. I love you, Mom. 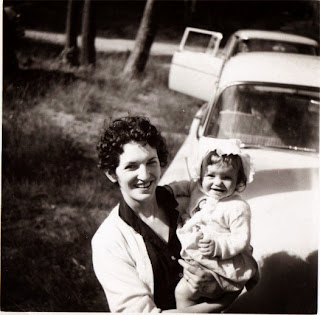 My beautiful Mother and I.
Right now I'm in a different place
And though we seem apart
I'm closer than I ever was
... I'm there inside your heart


I'm with you when you greet each day
And while the sun shines bright
I'm there to share the sunsets, too
... I'm with you every night


I'm with you when the times are good
To share a laugh or two,
And if a tear should start to fall
... I'll still be there for you


And when that day arrives
That we no longer are apart,
I'll smile and hold you close to me
... Forever in my heart
Posted by Robin at 7:49 PM 15 comments:

It's been a tough year. My stitching helps to keep me sane. I took a few pictures today of a few things I've been working on. 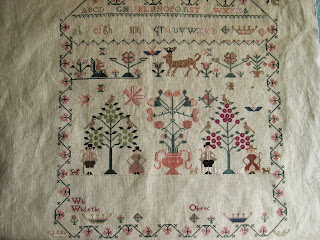 Mary Ann Jackson 1837
Of Female Worth
My nightly sanity booster...stitched on 40 ct LSL Pearled Barley.
Not My Favorite: 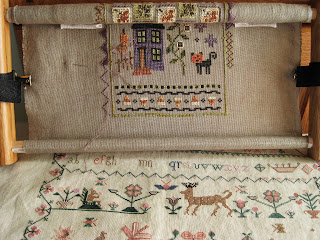 Top: Very Scary Mystery Sampler
Lizzie Kate
Bottom: another peak at Miss Mary Ann Jackson
Very Scary has been my work project (breaks and lunches). I started it a couple of years ago when it first came out but my interest waned. Earlier this summer I pulled it out and took it to work so I would be forced to work on it or stare into space. Stitching on anything is far more interesting than staring into space so I made progress. I brought it home this weekend in hopes that I could finish it once and for all. But frogs were hiding in the border so it will be around another day or two. Sigh... 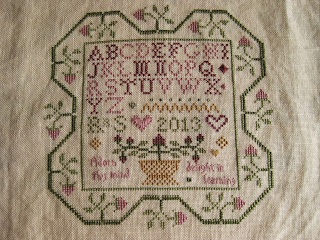 Rosebud Sampler
Ewe & Eye & Freinds
Love the sweet and dainty border on this one! Truth be told, that's why I decided to stitch it. The areas to the right and left of the basket were open and so I added an antiqued version of one of my personal beliefs. 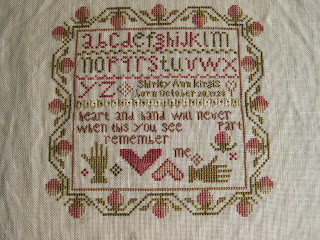 Heart and Hand
Ewe & Eye & Friends
This is dedicated to my Mother. There are a couple of things left to do: add the pealized heart button that came with the pattern in the open area and stitch an over one pink ribbon somewhere to represent my mother's ongoing battle. 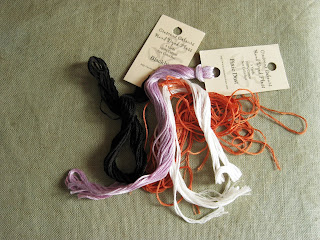 Next up are the ingredients for my next work project: Cackle from Raise the Roof Designs. I'm using a tea-stained greenish 32 ct mystery linen from my stash. 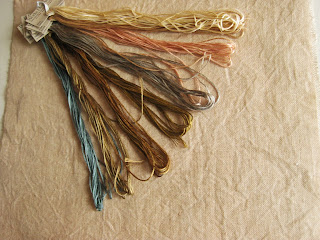 Ready to begin: Forget-me-not Sampler - With Thy Needle & Thy Thread.
This is a limited edition kit and it called for coffee-dying the 36 ct linen but I had tea. So tea-staining and oven drying commenced today and I think it turned out beautifully! Can't wait to start this and see how the threads look! Keeping my fingers crossed that I'll still be pleased!
Okay, enough for now. I should be heading to bed. It's back to work in the morning.
My spirits have taken several hits this past year and I am slowly, slowly trying to come back. I miss the blogging community and hope to be visiting and commenting soon.
Thanks for stopping by.
Posted by Robin at 12:38 AM 12 comments:

A couple of months ago I had a craving to stitch a sampler. I wanted something small because I have upteen other projects going on right now, something that I didn't have to decide floss colors for, a little something I could pick up and stitch on without thinking too much. Do you ever feel that way?
So stash diving I went and I pulled out an oldie but a goodie, "Meg's Bunny" from Sheepish Designs. 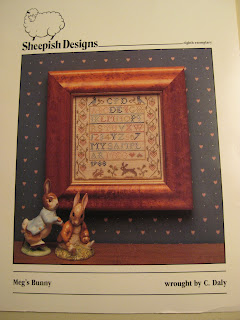 And so I commenced stitching... 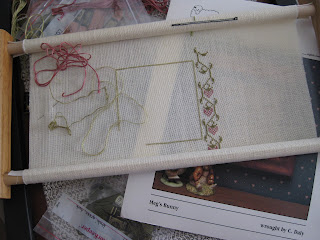 And I changed a couple of colors, moved things around a little bit, and stitched... 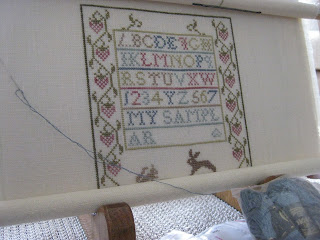 I kept worrying about whose initals to stitch in the top border. I finally decided to avoid that decision and finagled the strawberry border to replace the initials, switched the bluebirds to robins (of course)...and kept stitching, yes, when I should have been working those upteen other projects.

And I finished stitching the little sweetie this week! Meg's Bunny
Sheepish Designs
Here's a closer look at the changes I made to the top border: 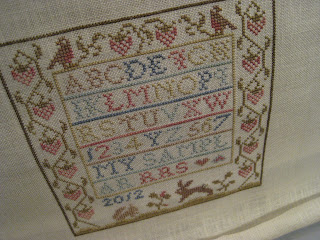 Check out the bunny's tail in the picture below; instead of cross stitches, I used french knots! It took three attempts before I found a color that showed up on the cream linen. 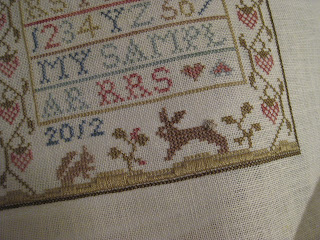 I love the strawberry border but I think that little tail is my favorite part of the sampler. What an enjoyable stitch!
Thanks for stopping by my little corner of the world today and thanks to those who left comments and advice about my Ann Norman sampler. I apologize for the delay in responding to your messages. My wireless router finally gave up the fight last weekend and I have been without the internet until this evening. (Yes, I have been suffering from withdrawal.) It will take a couple of days to get caught up.
Have a wonderful week!
Posted by Robin at 1:18 AM 23 comments:

A few weeks ago, Ann Norman arrived on my doorstep. Of course, I was bursting with excitment to see her. My hands shook as I opened the box and I held my breathe as I pulled her out and unfolded her wrappings. My first impressions, in order, were: "She's beautiful and colorful and so full of little details and I love the border", then relief set in ("I didn't buy a fake antique, she's the real thing"), and finally joy that she was mine. I think I even hugged her!

May I introduce to you the handiwork of Miss Ann Norman! 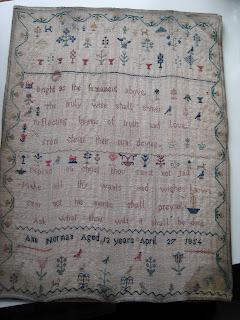 Ann Norman - aged 13 years April 27, 1854
Stitched in cross-stitch on high count linen (40+ threads per inch) with silk threads.
When I began looking closely at her condition I could have cried. The linen is discolored and stained especially around the edges where it probably was covered by a wood frame, and distorted from being nailed to that @#$% backing board for so long. There are a few spots that I'm guessing may be stained with blood (perhaps where Ann poked herself with her needle?), one of the bottom corners appears to have been water damaged as the colors have bled, and there are a few small holes scattered around, but I am, never-the-less, simply enchanted by dear Ann! 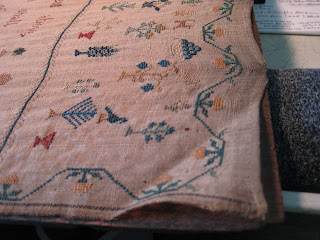 Close up of top right corner where Ann escaped from one of those awful nails.
Seeing Ann up close, led me to think about the antique samplers that have survived over the years despite the handling, mounting, framing, and storing methods that were used. I am so thankful for the survivors! Perhaps they survived because they were stored away in a drawer, or the back of a closet, or up in an attic and forgotten for decades until someone discovered them again. And I'm thankful for the finders that didn't disregard them as just handiwork and of no value.
Almost as soon as Ann arrived, I knew I wanted to stitch her again to see her as clean and as bright as she once was. I've been having so much fun pouring over her little, sometimes miscounted, stitches to chart her that I can hardly pull myself away. As I chart, I feel like I'm getting to know a bit about Ann. I'm sure she liked flowers, dogs and birds because she stitched lots of them into her sampler. 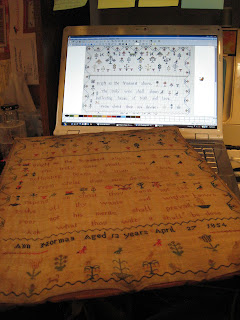 I imagine sampler-making wasn't one of Ann's favorite pastimes. For one thing, she wasn't particulary concerned about stitching on the vertical thread or allowing two threads for each stitch or space. Sometimes Ann left an even number of threads between stitches and sometimes an odd number. Another interesting tidbit I found is that when Ann discovered she stitched the wrong color or changed her mind about a color, she simply stitched over the original color with the new color. One of more obvious examples of this is in the lower section. Ann stitched two red birds and then went back and added a few black stitches on top of the red stitches (perhaps to make the birds look more like cardinals?). This young Ann didn't have the time or the inclination to create a perfect sampler. I think she was just itching to get it done and move on to more interesting activities. Ann was definitely not a frogger!

I have no idea where Ann lived or even if she was American, but I would love to find out. The linen she used has a blue woven line along the right and left selvage edges. From edge to edge the linen is 13 inches wide. Does anyone know where this linen was from? Does anyone recognize anything about the sampler style that might place it? 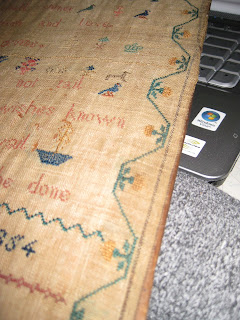 I would very much appreciate any advice or leads to information about conservatively remounting and framing antiques samplers.

As always thanks for stopping by my little corner of the world. Wishing you a wonderful week and hope you find time for stitching!
Posted by Robin at 1:20 PM 7 comments: 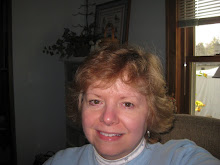 My name is Robin and I live in the heart of Michigan with my husband and our four furry felines. Stitching is my passion. I love samplers and smalls, linens and overdyed threads. I also consider myself a collector because after 35+ years of stitching I have accumulated more stash than I could ever stitch in this lifetime. I recently began dappling with designing and I'm having fun exploring my creativity. 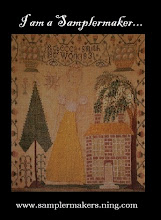 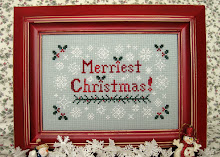 If you would like information about ordering the chart pack for this pattern, please email me at robinndlwk@aol.com.